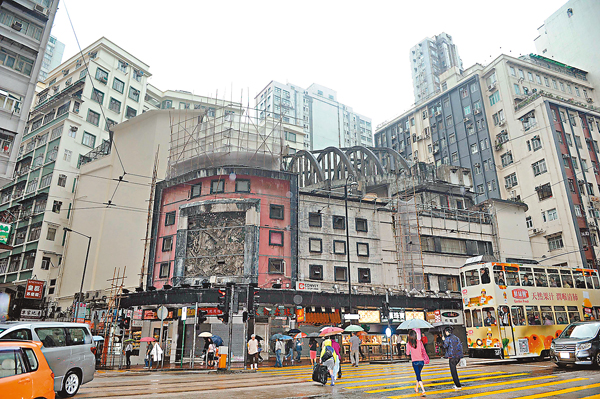 譯文：The entrance of the State Theatre has been leased out to vendors selling towels, cooking utensils and plastic toys for many years. Colorful backpacks of various brands are hung up for sale alongside the cinema complex, showcasing a vivid sense of neighbourliness.

Tape recorders shouting voices of salesmen occasionally catch the attention of pedestrians, but most pass by in a rush and do not seem to notice the glorious history of the building.

Opened in 1962, the "Lee Cheong" grocery store has witnessed the ups and downs of the local film industry. Even though the cinema was so popular in 1960s that people often had to queue up for film tickets, the business started going downhill in 1990s at a time when the television became a must in most households.

A bundle of intriguing anecdotes

"It was gorgeous to have escalators in the theatre at that time," recalled the grocery store owner Mr. Lai, who told that many people rushed there to have a try because it was the only place escalators were seen other than the Man Yee Building in Central. He remembered that every time Bruce Lee's movies were released, long queues would gather outside the cinema, "and it was common for people to snatch rice wine and peanuts before the shows began. It brought the grocery store a brisk business."

Mr. Lai had shared many other interesting stories: the complex was called a "petty Shanghai" in 1960s when many Shanghainese moved into the building; that it was later called "little Fujian" when Fujianese had taken the turn from 1970s to 1980s. The complex, according to rumors, due to its locational convenience, was an ideal place for a number of policemen to "raise" mistresses. "As the old saying goes: keep a mistress in a splendid abode," he burst out laughing.

Tsang Brothers established the "Fai Wong" tailor house on the King's Road in the 1970s. Their shop benefited from the cinema. The elder brother Mr. Tsang Siu Man recalled that orders would habitually rise in September, because most folks wanted tailor-made new suits at the turn of a new year. A new suit was expensive at that time; it could cost several months of savings, and the wage of an ordinary white-collar worker was just an average of about HK$1,000. During peak seasons, they had to craft at least 10 suits per day and would need to recruit tailors from outside.

As times changed the sales started to fall. When the tailor house moved into the theatre in 1993, the tailoring industry had started going downhill, and their business finally changed from tailoring to clothing alteration.

Mr. Tsang worried that as the lease became due at the end of this year, he was not sure whether there would be a renewal of contract. Seeing that rental cost has become unaffordable nowadays, he is ready to fold up the business. "It is a pity to say farewell especially when you have developed quite an affection for the place over the past decades," he sighed.

The Princess Optical Co. has been in the complex since 1992. The owner Leung Wah Shing, over 70, described the district polarized between the utmost wealthy and the downright poor. Having occasionally seen elderly people with broken eyeglass frames, who could only afford lenses valued at HK$150, he would "donate" brand new frames. Running the business for a few decades, Mr. Leung has become familiar with the customers and some of them have patronized the shop over three generations.

The Antiquities Advisory Board held a meeting last month, in which certain members of the committee deemed that the State Theatre, a building with historical and architectural merits, should be given a classification above Grade III. But the board's panel has yet to propose a grading for it because of inadequate information provided by the Antiquities and Monuments Office.